There has been a lot of discussion in the ski mountaineering community regarding tech (Dynafit) compatibility for climbing boots. Such functionality would be of high value in Alaska, where long ski approaches are common. Typical ski setups for this application currently include Silvretta bindings, which work quite well, but are rather heavy and are now obsolete. Alternatively, some folks have modified alpine touring (AT) boots to improve their climb-ability (i.e. ankle mobility), but these often fall short of modern mountaineering boots.

Having exhausted many options and doing an extensive amount of research on the web, I took it upon myself to attempt modifications to my La Sportiva Spantiks. My intent is to establish a few procedures and guidelines for these modifications and report on the performance of my own prototype. First, let me show what I've done and how I've done it.

The following is a list of the materials I used:
And the following tools were quite useful as well:

Step 1: Remove the bit from the sole blocks

This took a little finesse. My intent was to soften the plastic enough to be able to snip it away cleanly from the bit. I used my electric oven to slowly warm the sole block in a metal dish.

However, first I removed the Vibram sole from the block assembly (the black rubber flap, shown below), as I was worried it might smolder at higher temperatures. The adhesive between the plastic molding and the Vibram sole became soft at around 220°F. I could then peel the sole off of the assembly and discard it.

Once the Vibram sole was removed, I placed the molding into the oven and started increasing the temperature in increments of 25°F until the plastic softened (between 375°F and 400°F). The plastic snipped away from the bit quite cleanly on the first block. However, the second sole block got too warm and some of the plastic stuck to the bit--a pain to remove. The plastic and rubber parts are not needed--only the metal bit. 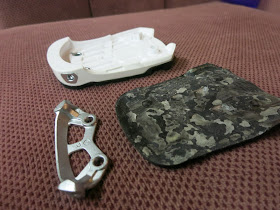 Step 2: Separate the sole from the boot

This is probably the most painful part of the process--both in labor and in the destructive act of cutting into your precious size 11s. I used a thin hack saw blade to cut the rubber away from plastic boot bottom. A putty knife is also helpful in this regard. 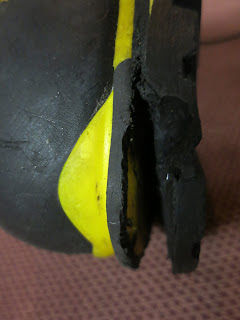 Some shaping of the rubber flap was also necessary. I used a Dremel bit to grind the profile of the bit into the sole. You'll notice that the metal bit is upside-down against the yellow plastic boot bottom--this is so that the sockets do not stick up too high and interfere with the crampon bale ledge. The binding works totally fine this way, as it is designed for 360° of rotation. 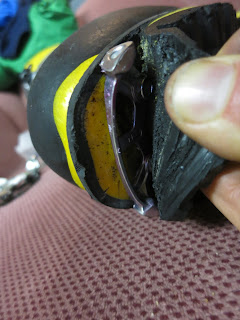 NOTE: Placement of the bit is absolutely critical to the touring performance of the boot, binding, ski system. Make sure that the bit is oriented such that the boot heel will land on the CENTER of the ski when it comes down. Once you proceed with the next step there will be no further opportunities for adjustments!


Step 3: Drill and mount the bit onto the boot

The sole block that I used came with a metal mounting bracket, which was extremely useful for this modification. You can see the arrangement of the bit and bracket in the photo below. Again, the orientation shown is how I mounted the bit--upside-down from the standard orientation as mounted in the commercial sole block. 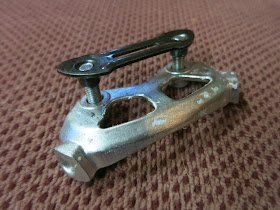 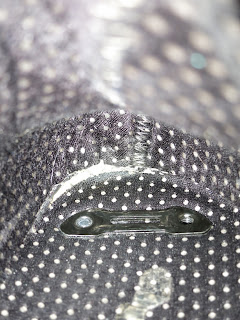 It was important to ensure that the screws were flush with the mounting bracket when totally tightened down onto the bit--I didn't want screw tips poking into my boot liner! (I had the cap screws trimmed to length.)


Step 4: Prepare the bit for adhesion

The structural adhesive I used requires proper surface preparation. Just roughing up the metal surface with sandpaper and applying a thin coat of primer was all that was required. The adhesive system I used is shown below, along with the prepared bit. Note that the sockets themselves were masked during application of the primer. 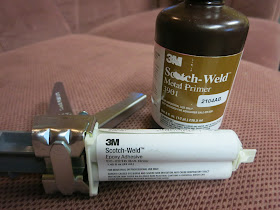 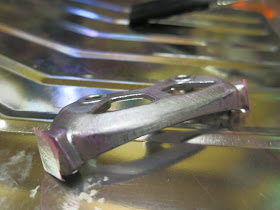 Step 5: Apply the adhesive and cure

Once the bit was primed and prepared for installation, I mounted it into the bracket and applied the adhesive. It is critical to achieve the proper mixing ratio and to thoroughly combine the base and the accelerator--I highly recommend the mixing tips. 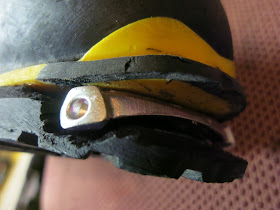 The process can get a little messy, as the adhesive takes 7 days at room temperature to fully cure. I used masking tape to round out the shape of the epoxy and duct tape to hold the sole up against the toe/bit. The photo below was taken after the first few days of adhesive had cured enough to hold the shape of the boot. Additional applications of adhesive were made in order to fully fill the remaining voids. 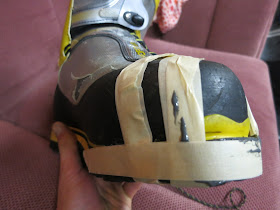 Some doctoring will be required after the cure is complete, but you end up with a result that looks something like this. My current mountaineering approach setup includes the modified Spantik boot, a Dynafit speed turn toe binding, and a pair of 205 cm Madshus Glittertind skis. 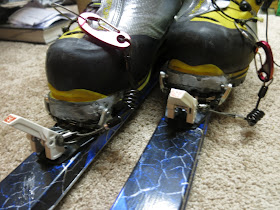 For my first field test I decided to try the setup on a climbing/skiing loop tour in the eastern Alaska range. Our team of four traveled up the Fels glacier (12 miles) to the base of Snow White peak (photo credit Brian Robinson). 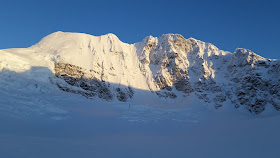 We ascended the steep west face (shown above) to the summit at 9,000 ft. What a joy to have skis less than 5 lbs on my back! Below is a photo of the team at the top of the face (photo credit John Harley). 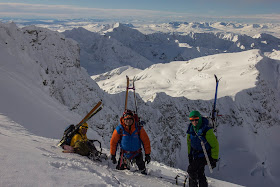 The descent was almost as scary as the climb... 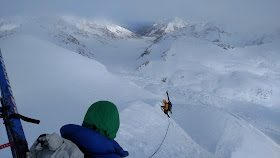 We continued our tour, following the ridge line to the summit of Mt. M'Ladies, where weather finally forced us back down onto the glacier. The ski return the next morning served as an excellent litmus test for the boot/binding system. A couple major wipe-outs with locked bindings didn't even faze the boot! 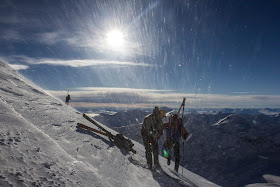 Overall, I am very pleased with the results. However, the bindings are very difficult to step into. I was bending over a lot and manually closing the jaws. Once clipped, though, the system performs very well.